Restoring life to the Borgo di Raischio, a gift from Holland to Umbria.

Home »
Blog »
News » Restoring life to the Borgo di Raischio, a gift from Holland to Umbria.

GHU is delighted to present the tale of two entrepreneurs in Umbria. 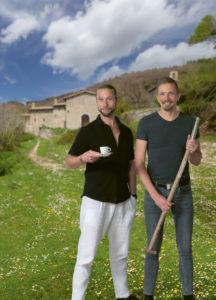 Vree told us and decided to change career.

Firstly, we supported them with a property purchase which was already underway. From reviewing the purchase deed to setting up utilities and the internet, Green Hills has facilitated the various stages of the process whilst always respecting client choice and preference.

Today we find ourselves witnessing a project which may seem huge daunting to many, but instead one which Leon Colbers pursues with a calm determination.

Borgo Raischio is located in a valley surrounded by unspoiled nature, within a large property, with its own private streams.

The village is an ancient medieval castle, located on the ancient Via Contana, or “Via di Spoleto” a mountain road difficult to traverse, which used to connect the town to the Valnerina, emerging near the castle of Schioppo, in the municipality of Scheggino.

Its nucleus is composed of an ancient fortified convent, surrounded by stone farmhouses, with a small rural church.

It is a beautiful example of the small settlements combining sheep farming and crop cultivation which used to live, in ancient times, in inaccessible but easily defensible places.

The simplest route to Raischio is definitely the path which starts at Vallocchia and turns left at the water troughs for animals that you encounter after about twenty minutes of walking through the woods.

The Borgo Raischio Farm, owned by Leon and Peter, has developed a very comprehensive and detailed business plan, which includes dairy farms for the production of Dutch cheese, beehives and an orchard for on-site production.

Borgo Raischio will also attract tourism. It will house a gym and six independent apartments, but it will mainly be a cheese making enterprise where traditional Dutch cheese will be produced and sold at a shop on site.

The role of Green Hills of Umbria is to facilitate local administrative and commercial relationships and to identify suitable business partners abroad.

The role of Artelingua has been and is to convey, through the Italian language, cultural nuances to enable these Dutch entrepreneurs increasingly to communicate effectively and independently with the local population.